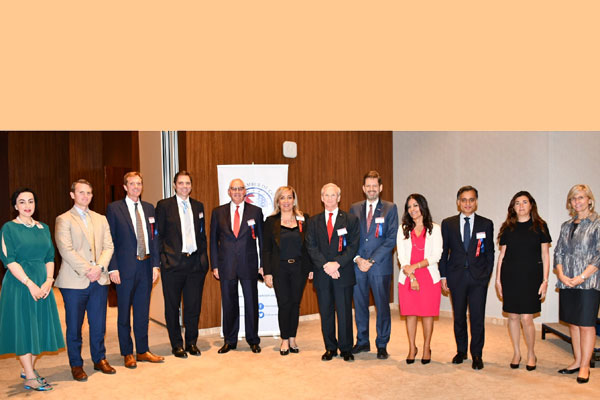 The American Chamber of Commerce - Bahrain (AmCham Bahrain) has announced its new 15-member board with Qays H. Zu’bi, the Senior Partner at Zu'bi Partners, as its President. Tatweer Petroleum CEO Jim Eastlack was elected the Vice President.

The announcement came following the successful election of its members at the annual general meeting (AGM) held yesterday (October 15) at the Wyndham Grand Bahrain Bay.

The meeting was presided over by Zu’bi in the presence of its outgoing Board of Directors, esteemed members, US Ambassador Justin Siberell, and guests.

The new board, which will serve for the 2019-2021 period, comprises a diverse group of business leaders representing Bahraini and American business.

These include Daniel Taylor, the CFO at First Bahrain Real Estate Development, who has been named the new treasurer, while Zahraa Taher, the Managing Director of FinMark Communications, has been appointed the board secretary.

The AmCham Bahrain AGM focused on highlights and successes from the past year and look at the strategy for continuing to enhance AmCham’s presence and value proposition for members.

Zu’bi opened the meeting, stating: "Tonight we would like to acknowledge and recognize the positive transition, accomplishments and growth enjoyed by AmCham over the past two years, as well as, the election of a new Board of Directors to build on the strong momentum that we have built."

"AmCham’s success has been a team effort lead by its board and fully supported by its members," he stated.

Commenting on the new appointments, Zu’bi, who was re-elected to the top post, said: "I am delighted and honoured to be given the opportunity to serve as president for another term. With the full support of our members, I am confident that the pool of skills, expertise and resources within this board will be instrumental in strengthening AmCham and further developing it."

"We will continue to extend AmCham's contribution to promoting US-Bahrain's trade growth, while also promoting the legitimate economic interests of AmCham members," he stated.

At the event, Ambassador Siberell said: "The Bahrain-US bilateral economic relationship, which began more than 120 years ago, has never been stronger…  I hope you will join me by taking advantage of the many commercial events during “Discover America Week”, which again takes place October 24 to November 1 and is an important opportunity to highlight the amazing work you all are doing to promote trade and investment between the US and Bahrain.”

Zu’bi went on to highlight AmCham’s vision for the coming term, stating: "It is AmCham’s vision, in co-operation with local associations, government and quasi-government bodies, to support economic growth through increased opportunities for networking, knowledge sharing, and advocacy."-TradeArabia News Service