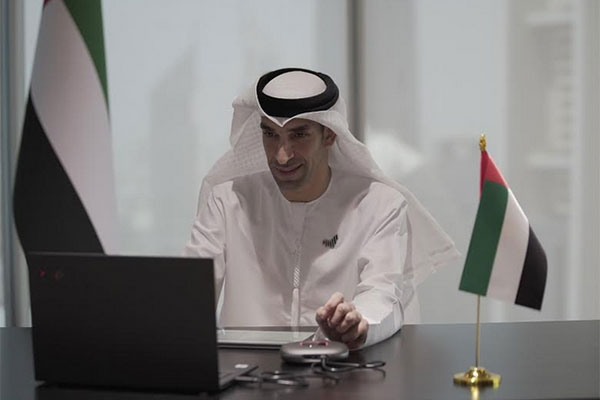 The UAE Minister of State for Foreign Trade recently held a virtual meeting with the British Minister for International Trade, to discuss the frameworks of bilateral trade and economic partnerships.

The virtual meeting between Dr Thani Bin Ahmed Al Zeyoudi and Ranil Jayawardena also discussed new opportunities to expand the scope of the existing partnerships in accordance with the priorities of the coming stage, in order to serve the strategic and development aspirations and visions of the two friendly countries.

The meeting followed up on some files related to bilateral cooperation efforts, which included coordination with regard to the convening of the sixth UAE-UK Joint Economic Committee. These include a review of investment opportunities and incentives in priority sectors, renewable energy, health care, food security and advanced technology services, as well as a number among the requirements for the restoration of tourism activity between the markets of the two countries.

Additionally, the meeting discussed the ongoing efforts to initiate discussion on a free trade agreement between the GCC and the UK.

During the meeting, Dr Al Zeyoudi underscored the UAE’s strong commitment to enhance bilateral cooperation with the UK in all fields of interest, especially in the area of trade and investments. He pointed out that the current stage demands joint dialogue more than ever, to explore the opportunities presented by the recent shifts in the global economic landscape brought about by the pandemic and Brexit. This period could mark the beginning of an era of intensified, diversified and more prosperous economic cooperation between the two countries, he added.

He further reviewed some of the measures and procedures implemented by the UAE to ensure business continuity in the face of Covid-19 crisis. He pointed out the country’s success in maintaining the operations of supply chains and the movement of maritime and air freight movement without disruptions to serve not only the country’s markets but also other global markets that form part of the network. These achievements confirm the efficiency of the country’s transport and logistics infrastructure and once again establishes the UAE’s distinguished position in the global trade landscape.

He also touched upon the flexibility of the UAE’s business and investment environment and the continuous efforts to enhance its competitiveness and attractiveness to foreign investments. He highlighted the issuance of the new Foreign Direct Investment Law, which provides more incentives and privileges to investors in areas that support the country’s efforts to transfer and localization of advanced technology and establish a diversified and sustainable knowledge economy.

Meanwhile, Jayawardena highlighted the distinguished relations that bind the two countries and the shared aspirations to continue strengthening the bonds of friendship and explore more opportunities to expand the horizons of cooperation, especially in fields that serve the agenda of economic diversification and other priority sectors.

The British Minister said that the UAE is Britain’s major trading partner in the region in addition to the vital trade prospects it represents and plays an integral role in facilitating trade and investments in the region.

The UAE is the largest market for the UK’s exports in the region, and the fourth in the world outside the European Union. It also accounts for 40 per cent of the total volume of trade exchange between GCC countries and the UK. The volume of non-oil foreign trade between the two countries recorded around $10 billion in 2019. Direct investments by the UK in the UAE’s markets exceeded the $20 billion, while Emirati direct investments in the UK amounted to more than $16 billion. – TradeArabia News Service