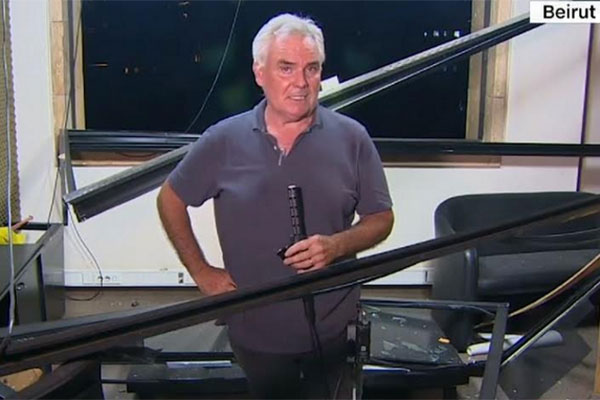 It began with deep, violent jolts.  Sitting in CNN’s bureau in the centre of Beirut I assumed it was an earthquake, and immediately crouched down, Ben Wedeman, Senior International Correspondent, CNN recounts the horror of the Beirut blast this week.

Then, fractions of a second later, the force of the blast reached us.  In the two rooms next to mine glass shattered, spilling inside.  Steel window frames were torn from the wall, cables and equipment were strewn across the floor.

Peering out into the street I saw the column of reddish smoke, now viewed thousands of times on social media, floating above our building.  Beneath me, the sight of rubble and the sound of panicked cries amid the dust.

Outside, the streets thronged with bewildered people, many cut and bleeding or worse.  Within hours, open lots became field hospitals, while the search for the many, many missing became ever more earnest and frantic.

Beirut is no stranger to conflict and chaos.  Many who heard the noise from afar had initially assumed it might be a car bomb, or perhaps an air strike.  But this was a blast the likes of which this most war-weary of cities has never seen, its tremors reportedly felt as far away as Cyprus.

A little over 24 hours later, people are still coming to terms with the scale of the disaster.  In many parts of the city, lives have been lost, homes and livelihoods destroyed.

“40 years, war, we’ve seen woes of every kind, but not like this,” one man, surveying the wreckage of his electrical store, told us.  “As if the economic crisis, coronavirus, the revolution were not enough, this tops them all.”

The terror of the moment remains fresh, too.  “The whole house collapsed upon us,” a woman told us as she pointed a bloodied, bandaged hand towards the rubble of her ruined home.

The international community has expressed sympathy and is sending medical aid, search & rescue teams and other assistance.  But this country was already on its knees before this cruellest of blows knocked it to the ground.

Beirut is also no stranger to struggle, but the feeling of despair in the face of this catastrophe is tangible.  Lebanon’s economy is in a state of collapse.  Its currency is in freefall, while prices of food and other necessities have skyrocketed.  In recent months it has not been unusual to see people, even the elderly, rummaging through rubbish in search of something to eat.

“We’re living a curse,” one friend told me.  In the words of the Lebanese American poet, Kahlil Gibran, ‘pity the nation’.